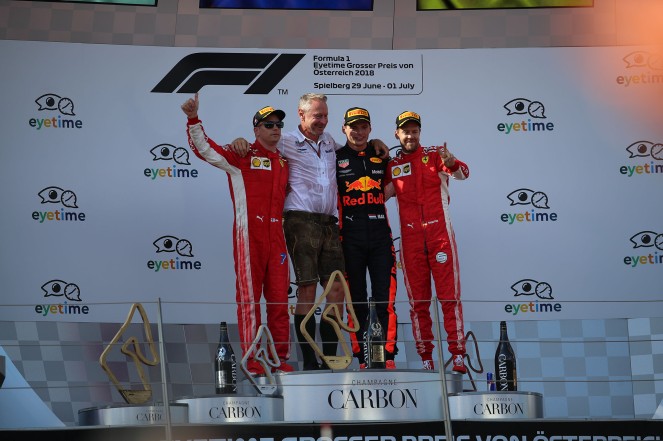 Q: Well done, Kimi. Sebastian, together with Max here. He did a pretty good job didn’t he?

Sebastian VETTEL: I told him, very good race, very consistent, no mistakes. We were chasing him down at the end but couldn’t quite make it.

Q: So tell us about your race Sebastian? It was a difficult qualifying, after a good start. Tough first corner, got pushed out and then you had to come back from there. One point in the championship, a very interesting day for the silver cars, so not a bad day at the office for you?

SV: No. Obviously it would have been nice to start further up. I tried to get some back at the start, in Turn 1, but it didn’t quite work. I was left with no place to go and then lost momentum. And then it was the same thing a little bit in Turn 3. I had to fight with the Renaults and the Haas in the beginning of the race and I lost a little bit of ground. Obviously we lost a little bit of time at the stop. So for us it was pretty much damage limitation but I think the pace was very good, the tyre management was good, so a positive day, it could have been better but a well deserved win for Max.

Q: (Christian Menath – Motorsport-magazin.com) Question for Seb. I think you said on the pit radio, when you came behind Lewis, after his stop, that they should have informed you a bit earlier that he’s stopping because you had something in your pocket still. Can you describe the situation?

SV: I was aware that we were fighting him but I was of the opinion that we were ahead, and I didn’t expect it to be that close and to be on the back-foot, so I think, if I look back, and I was thinking about it in the race as well, I was told enough. So, I can’t blame the team. Yeah. I thought I was taking it a little bit easy in the beginning because I was anyways a bit further back. There was no point. I didn’t understand in the beginning obviously the necessity to close as soon as possible. So maybe it’s also a bit my fault. But I think I had a bit of pace in hand – but, you know, I looked down, I saw the pitboard as well and there was 55 laps from the time the VSC… well, it doesn’t really come it, but was turned off… so yeah, I tried to save tyres and make sure we make it to the end, not knowing what happens because the first stint was not easy – but yeah, I thought we could have done, I could have done a bit better with a bit more information – but nothing dramatic. I think overall the pace was really good. I mean, I was obviously losing a lot with the pitstop, the double-stop that we did, which was the right call – but I probably had to come back from the longest way. I think the speed was good so I’m happy with the race but obviously it could have been better today. So I’m not entirely happy.

Q: (Daniel Horvath – Motorspormania.hu) Max, congratulations, you’ve got almost 20,000 Dutch supporters here in Austria. Do you have any special message to your fans who stayed in the Max Verstappen village during the weekend?

SV: You have a village here?

MV: Yeah! On the other side…

SV: You need to pay tax here then…

Q: (Peter Vamosi – Racingline.hu) Sebastian, you are the only driver on the internet who has not a social media account, Twitter, Facebook, whatever. Even Kimi has Instagram now this year and he’s doing very well. Why are you not present on the internet?

SV: I rather spend my time on something useful. It’s a shame that I lost Kimi. It was nice to be alongside. I don’t know what happened. I don’t blame anybody, people are free to do what they want. It’s just not my thing, I don’t have the need to share. If there’s anybody who has a question, obviously ask but I don’t find great motivation in telling people where I go, what I do. I find it’s quite boring so yeah, it’s not my thing.

Q: (Rik Spekenbrink – AD Sportwereld) Max, could you hear the Dutch fans on the final lap and secondly, how would you rate this win among the others?

MV: Nah. You always have to be honest.

SV: You have to say yes though.

SV: I heard them!

MV: But I could see some orange smoke, I could see them cheering so I think that’s good enough. Special moment. And I think this was one of the nicest victories but I keep saying that so I think at the moment they are all nice. But maybe hopefully, at one point, you just say yeah, it’s just another one. But at the moment I’m really happy with it.