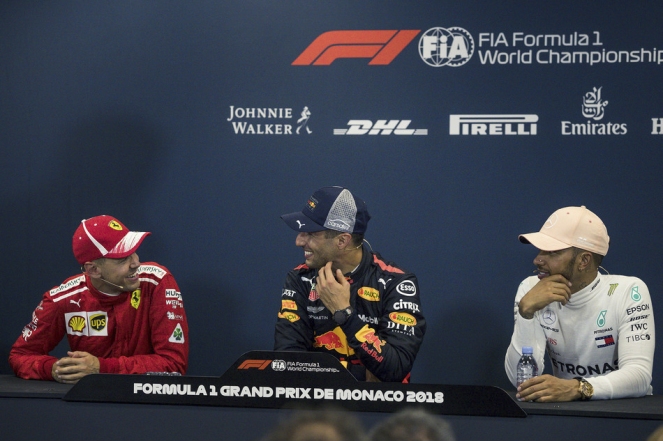 Sebastian, as you’ve got your helmet off first, we’ll let Daniel celebrate with your old team Red Bull Racing. You’re sixth podium finish here, but not the result you were looking for. You just didn’t have the pace today?

Sebastian VETTEL: I think we had the pace but it was a tricky race. I think Daniel had the answers at all times. First stint I could follow him fairly easily and then he started to push just, I think, when Lewis started to pit. Then he was a bit stronger there and I couldn’t follow. I was going through the tyres fairly quick. Next stint was a bit the same. I think he had a problem half way through with his MGU-K. I think towards the end I picked again but at the re-start I just didn’t have much confidence in the tyres and I lost quite a lot, otherwise it would have been nice to keep the pressure on until the end.

PRESS CONFERENCE – QUESTIONS FROM THE FLOOR

SV: yeah, it’s a different track. Tyre choice I guess is the same, so we’ll see. Obviously a bit more straightforward in terms of racing and overtaking than here, but yeah, we’ll see. Two weeks now to prepare and look into our strengths and our weaknesses. Then we’ll see where we are. It’s a different track, yeah it’s quite smooth on tyres, hence the tyre choice, so I don’t know. I think we’ll all be there. As you’ve seen, in the first six races it’s been really close, which is good for us, because going into Sunday, you never know and you’re in the mix and in the fight, so looking forward.

A couple of years ago, or a bit more, you three were all instrumental in getting Pirelli to change the tyres, so they could be raced on and pushed on. Today, we saw you lapping four, five, six seconds off the pace for pretty much the entire race. How do you feel about that?

Seb, anything to add on the tyres?

And for Sebastian, second part, you probably saw the lights flashing when the K didn’t work for Daniel. Did you change anything to put a bit more pressure on him, did you have any strategy for that?

SV: Yeah, not really. Obviously I saw the issue and I was also told by radio and that’s when I started to push, but as soon as I got too close or closer then I struggled to stay there and never got in range, especially at the exit of the tunnel, I was always too far (behind) to try and get close. I had the DRS a couple of times but obviously the track makes it quite difficult which is a bonus if you are ahead but with all the problems he had, he was still quicker than us.